Many owners have observed their dogs eating grass and, as a trainer, I am often asked why dogs eat grass.

When I researched this, I found that there are several theories but few studies on why dogs eat grass. 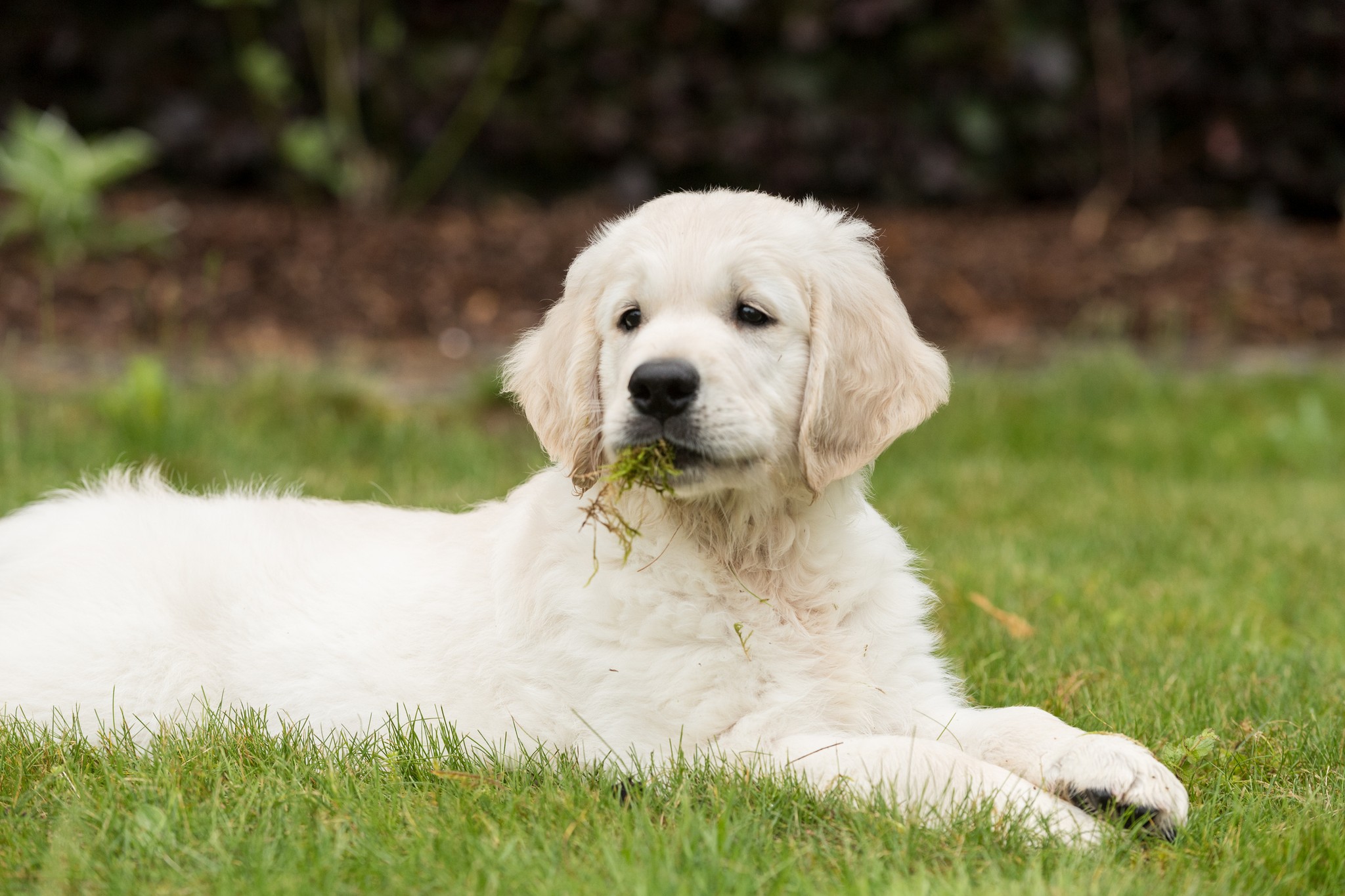 Theories include that grass consumption is an emergency source of nourishment, that it is a normal behavior that helps remove parasites, that it resolves nausea and induces vomiting, that it adjusts the Ph balance in the gut and/or that it adds needed fibre to the diet. Some argue that grass is not consumed to obtain nutrients since dogs that are fed a nutritionally complete diet will still eat grass. Others feel grass-eating is inherited from wild ancestors and is to help expel parasites. It is also known that wolves and cougars in nature are known to eat grass and that it is seen in 5-10% of their scats.

The results of a 2007 study showed that dogs are more likely to eat grass if they are hungry and that they ate less grass as the day wore on. Researchers concluded that grass eating is a normal and common behavior and should not be seen as a problematic behavior for most dogs.

Again in 2007, it was published that an 11-year-old castrated male Miniature Poodle had been eating grass and vomiting everyday for seven years. There were no abnormal findings on medical examinations. The vets advised the owner of the poodle to switch from the usual dog food to a high-fibre diet.  On follow-up, the owner reported that the dog had not eaten plants nor vomited from 3 days after initial dietary change. The dog had not shown any clinical signs when followed up 13 months later. This clinical finding shows a possibility that deficient diet, especially fibre, relates to the plant-eating behavior of a dog.

In a web-based survey of owners of plant-eating dogs which got about 3000 returns for dogs it was reported that dogs and cats eat grass as their preferred plant but, contrary to popular opinion, only about 10% of dog owners reported that their dog frequently showed signs of illness prior to plant-eating and only 20% reported their dogs regularly vomited afterwards. There was no relationship between type of diet and plant-eating, which does not support the dietary fiber idea.

The results of a 2009 study suggest that the nursing mother may also influence grass-eating behavior in her puppies. Six litters from mixed-breed bitches participated in the study and the puppies from each litter were divided into two groups. One group was presented with grass in the presence of the mother and the other group was presented with grass without their mother present throughout the study. All puppies were observed eating grass irrespective of the presence or absence of their mother. Three mothers spent less than two minutes each eating grass, whereas the other three mothers spent more than ten minutes eating grass.  The puppies with mothers present who ate grass for longer periods and more frequently, also spent more time eating grass than their littermates who were not with their mothers during testing and than the puppy’s mothers with mothers who ate grass less frequently and for shorter periods of time.

The results of that study suggest that grass-eating behavior in domestic dogs is innate and that the mother’s eating habits further influence the puppies’ grass eating. As the puppies matured and were weaned, they spent more time eating grass.

It’s apparent that more research needs to be done to answer why dogs eat grass and that the behavior could be for a variety of reasons.

Jane Bowers has been training dogs for over two decades. She teaches people to train their dogs in group and private training courses and has a keen interest in assisting dogs with behavioral issues. Her company is Dogs of Distinction Canine Training Inc. Jane has a monthly newspaper column on dog related topics and is a former host of a live call in TV show on animals. She is a strong advocate for force free and humane training methods for all animals. Jane has a degree in psychology and is certified as a dog trainer through the Certification Council of Professional Pet Dog Trainers and as a behaviour consultant through the International Association of Behavior Consultants and through the Association of Animal Behavior Professionals.
These organizations require a minimum number of continuing education units be obtained to retain certification. She is also a professional member of "The Pet Professional Guild," an organization committed to force-free training of animals and the "Association of Professional Dog Trainers," a professional organization of individual trainers who are committed to being better trainers through education. Jane is the content creator of the online course "Assessing and Interpreting Dog Behaviour," which is a course for law enforcement personnel who meet unfamiliar dogs in the course of their duties. She is the author of "Perfect Puppy Parenting," a guide to raising a happy, confident, well-behaved dog. Jane spent 17 years working for Customs Border Services and in joint teams with US Homeland Security and the RCMP. She spent a further 8 years working as an Animal Control Officer and Bylaw Enforcement Officer. Jane lives on a small farm with dogs, sheep, donkeys, and chickens. The dogs each came from situations that prevented them from living in their original homes. The dogs range in size and age and with the dog training and behavioral work, whether it's participating in the development of an online training course, working with a client's dog or tracking a lost pet or animal.
Loading