Train Your Dog to Resist Temptation in Four Easy Steps!

Dogs are like turkeys in one important way: they love to gobble. 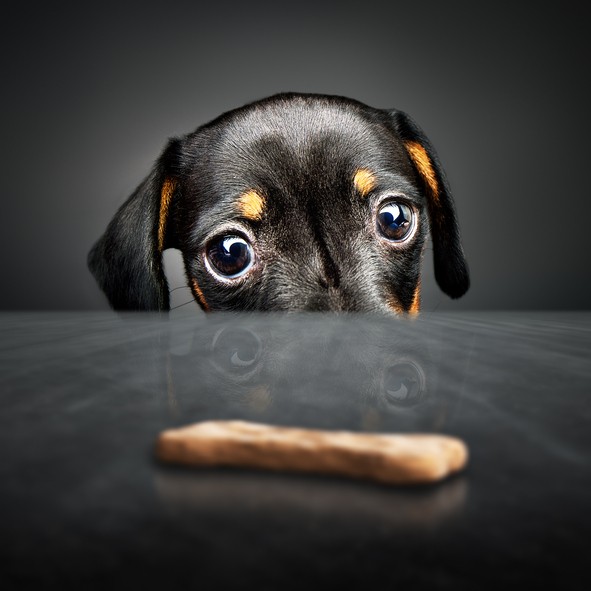 In the face of dogs’ superior speed and imperviousness to unpalatability, it makes sense to train a dog to “leave it.” Imagine this: you’ll simply say “leave it!” when you accidentally drop something forbidden. Your dog, to the surprised oohs and aahs of your family and friends, will pause and look at you (often adoringly) instead of charging over to eat, steal, shake, bury, play keep-away, or otherwise act, well, like a dog. What a useful trick, and so deliciously easy to train over just a few days.

Step One: Put a really good treat in a tightly closed fist and hold it out to your dog.

He will likely chew, paw, and lick your hand – just ignore him. Stay as still as a statue until your dog backs off or looks away for just a single tiny split second. As soon as that happens, say “take it” and open your hand, allowing him to eat the food. Do this ten or twenty times, then move on.

Step Two: It’s time to up the ante.

Get ready to move fast – your dog will, and you can’t let him win. Ask your dog to “Leave it!”, and offer your dog a treat on an open, flat palm, about a foot from his nose. The instant he starts to move towards your hand, smoothly and quickly close your hand and lift it up and away. Your dog will see that heading towards the treat causes it to run away. Try again, and be ready to snatch it away again. After five or ten times, your dog will likely give you something new: a brief pause. (It’s as though they are saying: “this isn’t working. What else can I try?”) As soon as you see that pause, say “take it!”, and give him the treat. Repeat until your dog won’t go for the treat at all. Then, hold the treat out for three seconds before he is allowed to “take it.”

Cue “Leave It,” and then place the treat on the floor about a foot from the dog. Cover it briskly as soon as he starts to come towards it, and then try again. After a few attempts, he’ll likely go back to pausing. Reward this with a treat, now from your pocket rather than the goodie on the floor. When he’s done five in a row without going for the treat, leave it down for three seconds, and then five seconds.

Step Four: Stand near your dog, and gently drop a treat.

The same rules apply: be ready to cover the treat if your dog makes a break for it! Your dog is likely wise to the game now, though, and after a few thwarted attempts to zoom in he should be back to pausing politely. Reward the pause from your pocket (in fact, you’ll need to continue to reward this behavior frequently. This is work, and work earns a paycheque. If you stop paying, your dog will – quite reasonably – stop working.) Once your dog has paused politely five times in a row, try dropping a couple of treats. Then more interesting forbidden stuff, like leftovers. At this point, most dogs don’t need more set-ups. They are ready for the real world.

Final note: If you get bogged down, take a positive dog class that includes Leave It on the curriculum. Practising all alone is no one’s strong suit and the repetition and coaching in class will be a godsend. 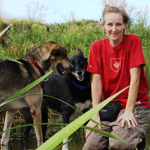 Kristi Benson is an honours graduate of the prestigious Academy for Dog Trainers, where she earned her Certificate in Training and Counseling (CTC). She lives and works in the Parkland Region of central Manitoba Canada, where she teaches dog obedience classes and helps dog owners in private consultations – both in-person and via video chat – for a full range of dog problems, from basic obedience to aggressive behaviour. Kristi is on staff at the Academy for Dog Trainers, helping to shape the next generation of canine professionals. Kristi’s dogs are rescue sled dogs, and for fun she runs them with a dog-powered scooter and on skis. Contact her through her website, and check out her blog, Facebook page, or Twitter for training tips, articles about dogs and training, and more.