I have two Great Pyrenee dogs that are working Livestock Guardians. They have a  natural protective instinct over their alpaca herd that had nothing to do with their training. I did, however, have to train these two dogs on how to ride in the car. When I got the first Pyr (Moose), he'd get very car sick. It took years for him (us) to overcome his nausea.

I know of multiple farms whose dogs have serious anxiety riding in the car. It is heartbreaking to see these mammoth dogs shaking with fear as they load in the car. They can face coyotes, mountain lions and bears with absolute confidence and fierceness. But, put them in the car and they quake in their boots!

I did a few things to help my elder get over vomiting in the car. We started with getting in the car and sitting in it for a few minutes and then getting out. We didn't go anywhere, just simply sat in the driveway. I then added a drive to the end of the block and returning, mixing it up between sitting in the car and driving down the block. I slowly added more time and distance to our rides making sure to talk to him non-stop, keeping my voice calm and happy. It took time and patience, but we can now go into town to the vet with no issues. He still drools a bit, but no more vomiting. Hallelujah!

When I got my second Great Pyr puppy, Yogi, this fall, I was determined to train him right away about car rides. Before he left his littermates and his momma, I'd go visit the breeder and briefly put him in my car. When I got him home I made sure to take him for short rides regularly; we visited friends and the vet for weigh-ins. I worked to make car rides fun and not traumatic. The rides have been uneventful with him, however, getting in and out of the car was an issue.

Yogi gained on average five pounds a week! By the second week after getting him home picking him up was not going to work (he weighed almost 30 lbs already!). To get him into the car I could manage to heft up his front legs and then hoist in his rear end... Getting out was the harder task. He was afraid to jump out but it was awkward and difficult to try to help him out of the car. I had to devise another plan to exit the car.  I found a little, light-weight step that I can keep in the car. Yogi knew how to go up and down the steps of my porch no problem. So teaching him to use the step required minimal training. Even now that Yogi can hop out of the car, he prefers to use the step. I decided, it isn't a bad thing that he still wants the step. These large dogs can get achy hips and legs as they age, so having a step will make it easier on us both. Having mastered that skill as a puppy is so much easier than trying to teach a dog later on.

I admit, neither of my Great Pyrs love car rides, but at least they can handle it. They are not stressed. I suspect they would enjoy the rides more if all their herd could be with them! 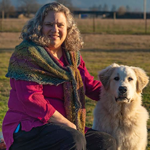 Cindy Myers is a medical intuitive who works on both animals and humans. She is an empath and can feel where emotions and energetic blockages are occurring and can help remove those blockages. She works with clients all over the country and internationally. Cindy does most of her work at a distance over the phone. She teaches webinars about animals and emotions and how to develop and use your intuition for yourself and your pets. She has authored two books. Her book 5 Steps to Animal Communication has lead to workshops. She has frequent speaking engagements around the country. She lives in Oregon on her alpaca farm. You can learn more about Cindy on her website, www.BeAnAnimallistener.com.
Loading